Perhaps you’ve seen a red Ford truck with a massive Mahatma Gandhi head in the back, driving out of our parking lot after school. Maybe you recognize the bright yellow smiling suns drawn on the whiteboards of classrooms with the name “Mr. Richardson” scrawled underneath. Whether you know him or not, chances are you’ve seen or heard of one of Jes Richardson’s distinct trademark symbols, which are not just for show. While most Redwood High School students may know him as a cheerful substitute teacher, many across the world know him as a tireless peace activist.

Richardson said he has been involved in activism for almost his entire adult life, creating his own organization called “Bridge of Hearts” ten years ago, and has traveled worldwide to promote his cause of peace. He visited Iran in 2007, when it seemed to him that the United States was about to go to war, and again in 2010 to see for himself if the Iranian people were as harsh as they were being portrayed by the U.S. media. When he returned from Iran, he talked with legislators in Washington, D.C., and asked them not to increase the sanctions on Iran. He also traveled to Israel in 2009 and returned with many stories of positive encounters he had with the friendly people there. 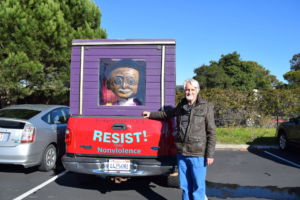 Richardson created the Gandhi head out of a beach ball and paper mache 15 years ago. His purpose was to support the “Mill Valley Seniors for Peace”, who demonstrate weekly, and to showcase the figure of Gandhi, known for his impact on creating peace in the world. Since then, the Gandhi Puppet has been spotted across the country, traveling all the way to Philadelphia to support Bernie Sanders for president in the 2016 election.

Before the puppet found its home in the red truck, Richardson was awarded the “Martin Luther King Jr Award” by the “Marin Human Rights Commission”. More than anything, the Gandhi puppet has become a widely recognized symbol throughout Marin County, decked out with messages, including, “RESIST! thru Nonviolence.”

“I was looking for an easier way to transport the Gandhi puppet, when low and behold, the Ford F-150 truck came my way (indirectly, because I was awarded the MLK Award). The truck used to belong to the fire chief in Woodacre. I took the opportunity to turn it into the GandhiMobile so I could drive around and encourage people to resist through nonviolence,” Richardson said.

The GandhiMobile serves as both a public educator and a discussion starter. According to Richardson, he writes questions on the whiteboard on the side, leaves out markers and enjoys reading people’s responses.  The most recent question: “What does love have to do with it?”